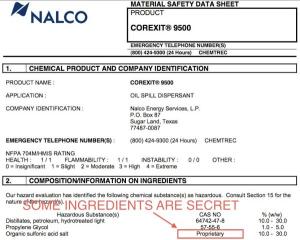 A confidential source within the EPA recently provided this author with a report that was submitted to the EPA and BP by a scientific group in Massachusetts and recognized by the CDC as being accurate.

This report breaks down the actual ingredients of the Corexit series of dispersants and explains the harmful effests to sea animals, children and adults. It is clear by reading this report that the Corexit dispersant is harmful when excesively used. The dispersant Corexit has been pumped and sprayed in the the Gulf of Mexico to break up the oil and the effect of doing this in massive quantities has raised serious concerns about a tainted food chain that comes from the Gulf of Mexico and also can have serious effects on the Ocean Mamal life.

To make matters worse, we learned last week from another Whistleblower that BP likely paid LSU in excess of $50 million to seal another study of the Corexit series of dispersants that included very specific scientific research into the effects of the Corexit. According to the Whistleblower close to the reseach, the Corexit is in fact extremely harmful to the environment, sea life, the corals, and will taint the food chain. The tainted food chain can not be consumed by humans and will expand beyond the current food chain as the food is consumed by ocean life as well.

This is a very telling matter and should be addressed by the EPA immediately. Corexit tainted oil is also being dumped into landfiles throughout the south and should actually be treated as toxic material. This will likely have devastating effects on the communties, livilihoods, and the States for years to come. Now, it is no longer just about the Oil Spill. It is also about the Toxic chemicals being dumped into the Ocean.

Follow these links here for the report and for the MSDS. We are following the story regarding the LSU report and working to get that report released by the EPA.

Hugh Kaufman is a senior policy analyst at the EPA’s Office of Solid Waste and Emergency Response. He is also a top critic against the use of a disperant Corexit. As most people know, the Gulf Recovery Llc has also been a strong opponent of the use of Corexit. Get the full story at the democracy Now Web Site.

Here is an incredible story by Steve Phillips of WLOX News in Mississippi. The question is, is this Oil Related or is it a Red Tide? See the story for yourself.

Have a Gulf Coast Business?

If you are a business owner or a resident who knows a business owner affected by the Gulg Oil Spill. contact us at network@gulfrecoveryllc.com to share your story, link your business web site to ours or advertise on one of our web pages for free for 30 days. We want to help support the Gulf Coast business community in any way we can.

Breaking tomorrow! We have it and the evidence! Not 1 story! But several over time. Stay close! This will shock you and anger you. #oilspill

Connect with the Gulf recovery LLc

Previously, there was significant discussion of contamination of intercoastal waterways. This is a critical subject. Hurricanes, fresh water usage (populations in New Orleans, Houma, etc) have reduced the barrier islands and water pressure that normally fights against tidal surges. The maps of Barateria Bay in Louisiana are incorrect. There are no barrier islands between Barateria Bay and Clear lake. Thus without proper defense deployment, the entire drinking water supply is at risk due to the intercoastal waterway connected to Clear lake.

We will be checking again today for the apparent Corexit signal that we have been obtaining on previous trips including water sampling using our improved (but still simple) Nansen Bottle. In addition to the “oil shrimping” testing, tarball removal (shallow sand bottom underneath water), verification of the helicoptor taken photos from yesterday of Ellis Island (off of Grand Isle) we will look at Corexit signals in Barateria Bay heading towards Clear lake.

Our proposal for protection of drinking water will be made at the La Fouche Council meeting this week.

Letter regarding Timeline issued by BP – Saga of Responsibilty Conitnues

A letter from President and CEO Bob Dudley was posted to the Official web site for the Oil Spill Response in the Gulf of Mexico. This letter was a response to the letter sent to him by Admir. Thad Allen, the National Incident Commander (letter: https://www.box.net/shared/tkjb73zu8s).
While the letter outlines the plan that is refered to by Admir. Allen, It still didn’t address this Nations corncerns for the chemical make-up of the dispersants that are being used in the Gulf. For more on that topic, continue to return for a new article regarding a new development in the Corexit 9500 saga.

You can read the letter issued and posted onto the Response Web Site: http://www.deepwaterhorizonresponse.com/go/doc/2931/770183/

“JUST TURN IT OFF”

The fight goes on for Gulf Drill Rigs